One-handed player’s passion for hoops has no limits

Fifteen-year-old Gavin Halagiere, a freshman at Waubonsie Valley, leads, inspires and always has a winning attitude.

Share All sharing options for: One-handed player’s passion for hoops has no limits

The boy, tall and strapping for his age, folded his 6-foot-1 frame into the bleachers and watched others — his peers — play the game. He clapped. He yelled encouragement. He took mental notes. He followed the movements of the ball and the players avidly.

There was no other place he wanted to be. Well, other than on the court, that is.

It was in a middle school gym in Naperville last June that Gavin Halagiere made his first major impression on the men — Dan Nolan and Ryan Gill — who would be his freshman basketball coaches at Waubonsie Valley High School this season.

Halagiere was one of about 30 rising freshmen participating in the Warriors’ summer hoops camp, with the boys split into a handful of teams. Other campers came and went, according to the game schedule, but Halagiere was different. He showed up even when his team was off.

During the 2½-week camp, Halagiere, a few months shy of his 15th birthday, didn’t miss a thing.

“This was a cool thing to see,” Gill recalls.

This was peak Gavin.

“Basketball is my passion,” Halagiere says. “I just love it so much.”

Gill nudged Nolan one day — or maybe it was the other way around — and the two took notice of the boy in jeans and a ballcap in the bleachers. He was a nice player in his own right, with a solid chance to make one of the two freshman boys teams at Waubonsie Valley, but it was clear how attached he was to the game.

“We called him over, and he sat next to me and coach Nolan and helped us coach,” Gill says. “He kind of took over that role.”

A great kid, they soon would realize.

“A work in progress,” Halagiere says.

Halagiere has no left. But seriously, folks.

The first big man off the bench on Waubonsie Valley’s freshman B squad, Halagiere is a one-handed player. He was born without a left one. One in about 2,500 babies in the United States is born with an upper-limb reduction, according to the Centers for Disease Control and Prevention.

An appropriate term for Halagiere, whose left arm ends essentially at the wrist, is congenital amputee. Other terms that fit: loving son, devoted brother, good friend and terrific teammate.

“As a kid, he’s awesome; I’ve never met anybody who doesn’t like him,” says fellow freshman hoopster Jackson Langendorf, a friend since the first day of sixth-grade band class. (He and Halagiere played the trombone and the tuba, respectively, for those of you scoring at home.)

By the way, here’s one more term that fits Halagiere: double-digit scorer. In only his second high school game, he put up 12 points in a victory against East Aurora. He has continued with steady contributions through the Warriors’ 5-2 start, which included a holiday-tournament title at Jacobs.

Halagiere does most of his work down low, but he’s more than capable of sinking a jumper, hauling in a big rebound, setting a wicked screen or swinging the ball to an open shooter.

It’s called basketball. He plays it. Not really that complicated, you know?

“When he made the basketball team, lots of people were like: ‘Oh, wow, how did he make it? He has only one hand,’ ” says team manager Justyn Garrison, who has been pals with Halagiere since kindergarten. “I’m like: ‘OK, well, I want you to one-on-one him. See what happens then.’ ”

In middle school, Halagiere was big and strong enough to score more than his share of buckets. The going got tougher with high school tryouts, of course, when there were three consecutive days of cuts. The 40-plus boys who tried out had to be trimmed pretty much by half.

“I was so excited when I made it,” he says. “I told my parents, and they were very proud of me.”

He made it with room to spare.

“He was nowhere near the end, not a bubble kid,” says Gill, 28, who is also a special-ed teacher at the school. “He made the team because he’s good enough. He’s a talented basketball player. The fact that he has one hand, we didn’t even talk about it.

“Gavin is a great character kid, which is something we look for in our program. He’s a leader. He talks, he communicates, he’s very positive. He gets it; he’s bought in. He understands the importance of being a part of the team.”

Halagiere isn’t shy about jumping all over a teammate, but his specialty is picking a guy up. It’s not uncommon at Warriors practices to see a player doing pushups, as ordered by the coaches, after committing some mistake or another — and a one-handed teammate down on the floor right next to him. Yes, doing the pushups, too.

Does it get any better than that?

Halagiere’s parents, Rene and Josh, didn’t know the gender of their baby until he was born, but a series of ultrasounds had informed them about the missing hand. That brought tears, naturally, and the sort of concerns any parent would have: about acceptance, teasing, physical limitations and other unforeseeable struggles.

But when Gavin came along and the delivering doctor said, “He doesn’t have a left hand” — no kidding, Doc — and, “Maybe put a glove on him in public, so people won’t see” — you’ve got to be kidding, Doc — a resolve set in to raise the boy like any other child.

“Hiding it? That wasn’t something we’d ever have thought of,” Josh says. “That’s who Gavin is. There’s nothing wrong with Gavin.”

Still, life with one hand was no layup. Gavin was 4 when sister Lydia was born, and before long he told his mom he wanted a second hand, too. So he was fitted with a prosthetic device, which he used precisely once before deciding it wasn’t his style. Actually, that’s not entirely true. For a while, he played with it at the expense of his three older siblings, Rene’s children from her first marriage.

“He would pinch us with it all the time,” says sister Kendall Mackey, 26. “Eventually, Mom put it on top of the fridge. He’s always been a funny kid. He’s got a good sense of humor, that’s for sure.”

Outside the home, Halagiere wasn’t yet as comfortable socially as he would become. When other kids would stare or, worse, grab his left arm for a closer look, it made him anxious; he withdrew. But early in his elementary school years, he began to be enrolled in the camps — for limb-different children — that would change his life.

The camps, all around the country, have lovely names — Giving to Fly, NubAbility Athletics, Never Say Never — and Rene is a parent advocate for all of them.

“Gavin saw other kids like him, and he became unstoppable,” she says.

First came baseball. Halagiere met former major-league pitcher Jim Abbott, a famously one-handed lefty, through NubAbility and gave that sport his best shot through fifth grade. His natural-born strength, however, didn’t yield the kind of raking he wanted to do at the plate.

Next came basketball, which Halagiere got involved with in fifth grade. His interest in the sport — and his belief that he could excel in it — only deepened after he was coached at a NubAbility camp by Zach Hodskins, a one-handed guard who played college ball at Florida and now plays professionally in Germany.

“I just found the love for it,” Halagiere says. “I loved the intensity and the challenge. What I love about basketball is you’re just going and going.

“It’s just a challenge. It’s just finding out a different way to do everything from a normal person with two hands. If I don’t have a left hand and other people do have left hands, I work and practice 10 times harder.”

That goes for when he’s in the weight room, too, where he wraps a special strap around his left arm to do pullups and attaches a hook with which he can pick up weight plates to do curls and other lifts.

“He’s got the biggest heart,” says Mackey, 26. “Our whole family is just in awe of him. I’ve never looked up to somebody younger than me. We all thought it was going to be a giant limitation, but he does more than we do. The kid is amazing.”

Halagiere’s parents are no longer married, but they live only a few miles apart — one in Aurora, the other in Naperville. The high school is somewhere in the middle, and his games are occasions for his family to gather and root like crazy. He has no bigger fan than 10-year-old Lydia.

“He makes me proud,” she says.

Just so everybody out there knows, Lydia has her big brother’s back.

“Some kids see him for the first time and wonder: ‘Was he born like that?’ ” she says. “I say: ‘Yeah, he was born like that, but he’s no different than you or me. He can do everything you can do. Maybe things are a little tougher sometimes, but whatever you can do, he can do.’ ”

For the record, that includes playing golf, fishing, kayaking and shooting at the gun range. It also includes shoveling snow, cooking and washing the dishes. 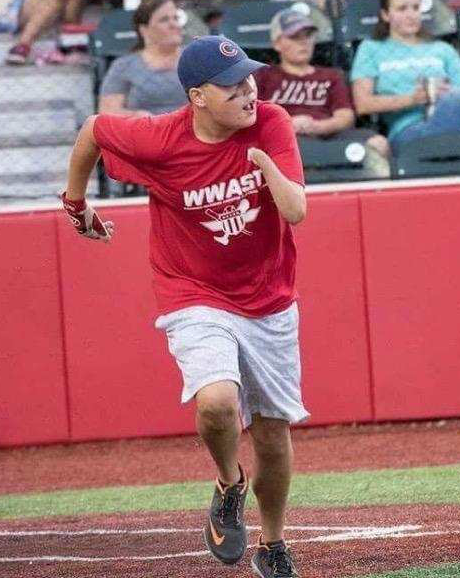 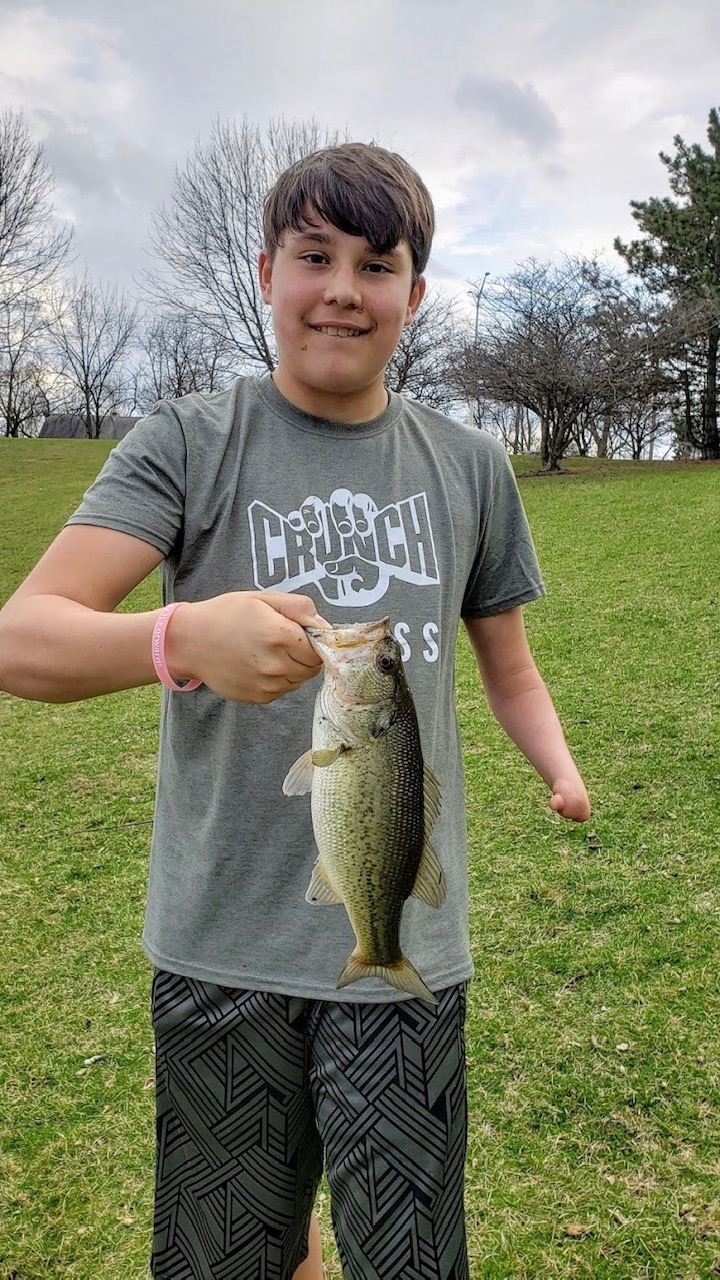 Gavin Halagiere is always eager to get involved with new challenges. Photos courtesy of Rene Johnson and Josh Halagiere.

“There’s nothing he doesn’t contribute to,” his mom says.

He seems to have a rare gift, too: the ability to inspire.

“I know in my teammates’ heads, they’re like, ‘This guy, he’s doing stuff — let’s follow him,’ ” he says. “So that’s cool. And I try to be the best example I can be for my sister because I want her to become successful and live a good life. That’s just what I want for my family.”

Halagiere has always been sweet, thoughtful and quick with a joke. Like when he had a new classmate on the edge of his seat in elementary school with a tall sea tale of having his hand bitten off by a great white shark. Or when his eighth-grade basketball coach absentmindedly yelled at him — “Use your left!” — for shooting a layup right-handed during a drill, and Halagiere deadpanned, “What left?”

“The coach was really sorry, but Gavin and the rest of us were cracking up,” Langendorf says. “He has such a great sense of humor about it.”

Mackey calls herself Gavin’s “sister bear,” with a charming protectiveness in her voice. When she asked him a few weeks back what he wanted for Christmas, take a guess what he said.

All she could do was shoot him a dirty look and then smile.

The humor probably can be a bit of a defense mechanism at times, but what could be more understandable than that? More important: He’s proud of who he is.

“He tells me all the time: ‘I’m glad I was born this way because I wouldn’t have been able to meet some of the people I’ve met and I wouldn’t be able to inspire people,’ ” his mom says. “He wants to be a motivational speaker for kids like him.”