In the aftermath of unrest over George Floyd’s killing — and in the months to follow — business owners salvage what they can and rebuild if possible.

Tess Porter sat on the sidewalk, with her face in her hands, and cried uncontrollably.

It was early the morning of June 1, nearly a year ago. She was sitting with her back to the salon she’s owned for more than 35 years. Its windows had been broken out, and when she lifted her head and looked around, she saw beauty products from her shop scattered along Ashland Avenue.

The shelves at Tess’s Place Style Shop, 1605 W. Garfield Blvd., were nearly empty of inventory. Her salon chairs were turned over. Hair clippers were stolen. Shattered glass littered the inside.

She had wanted her shop to be a sacred place, one where her clients could come in and feel better about themselves. But it had been violated, and she was ready to give up.

“I felt as if I had been betrayed because, with what was going on, it was supposed to show the people that we are together,” Porter said. “And I did not feel like we were together in any of this.”

Just a week earlier and over 400 miles away, a white Minneapolis police officer had killed a Black man named George Floyd. The disturbing video that showed Officer Derek Chauvin with his knee on Floyd’s neck for around nine minutes went viral, igniting civil unrest in cities across the country — Chicago included.

Porter had hoped the mass protests taking place everywhere would put a spotlight on police accountability and calls for significant reform. Then, for nearly 72 hours, the city erupted in a state of lawlessness as scores of people ran in and out of businesses, leaving behind only what they couldn’t carry out in their hands. 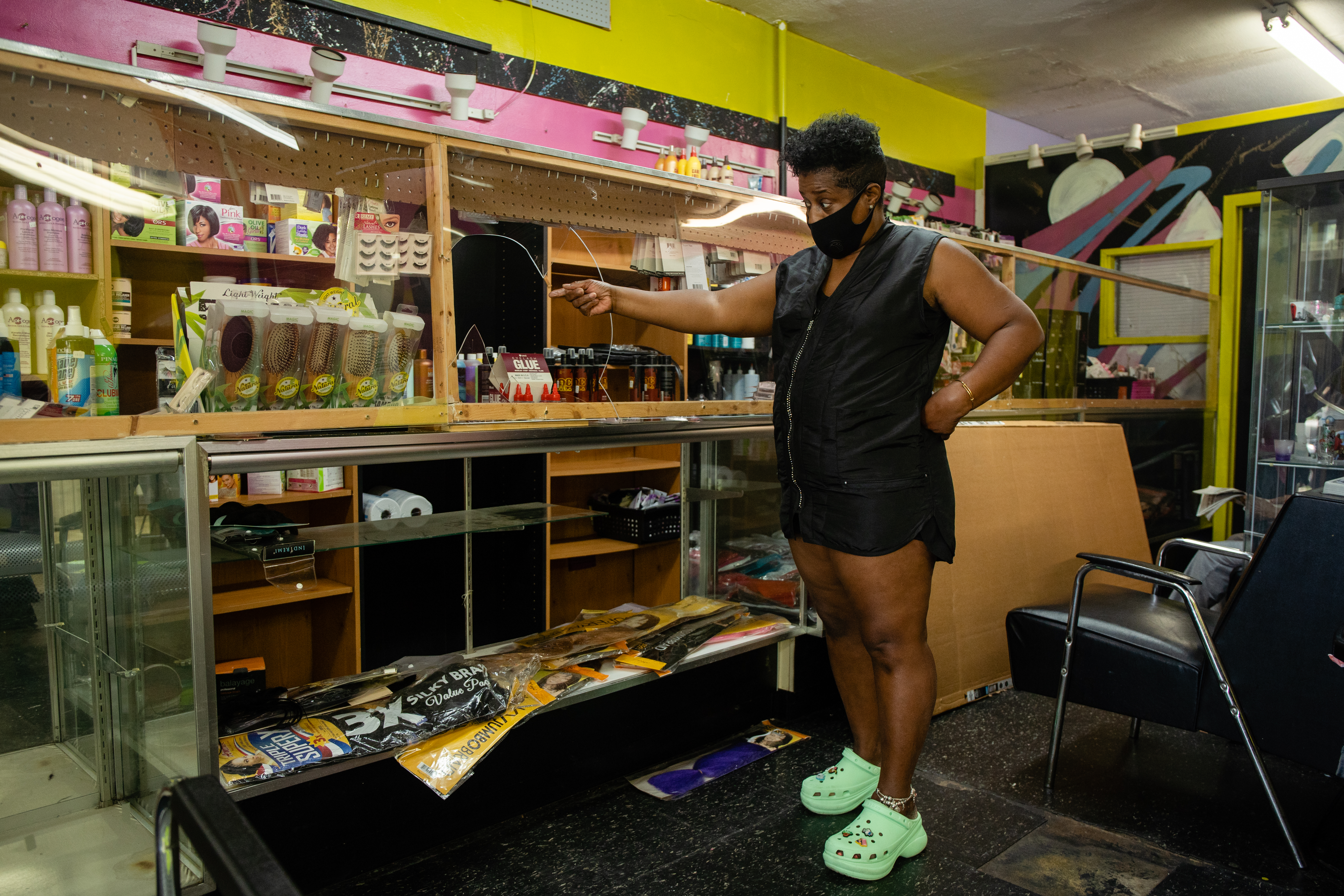 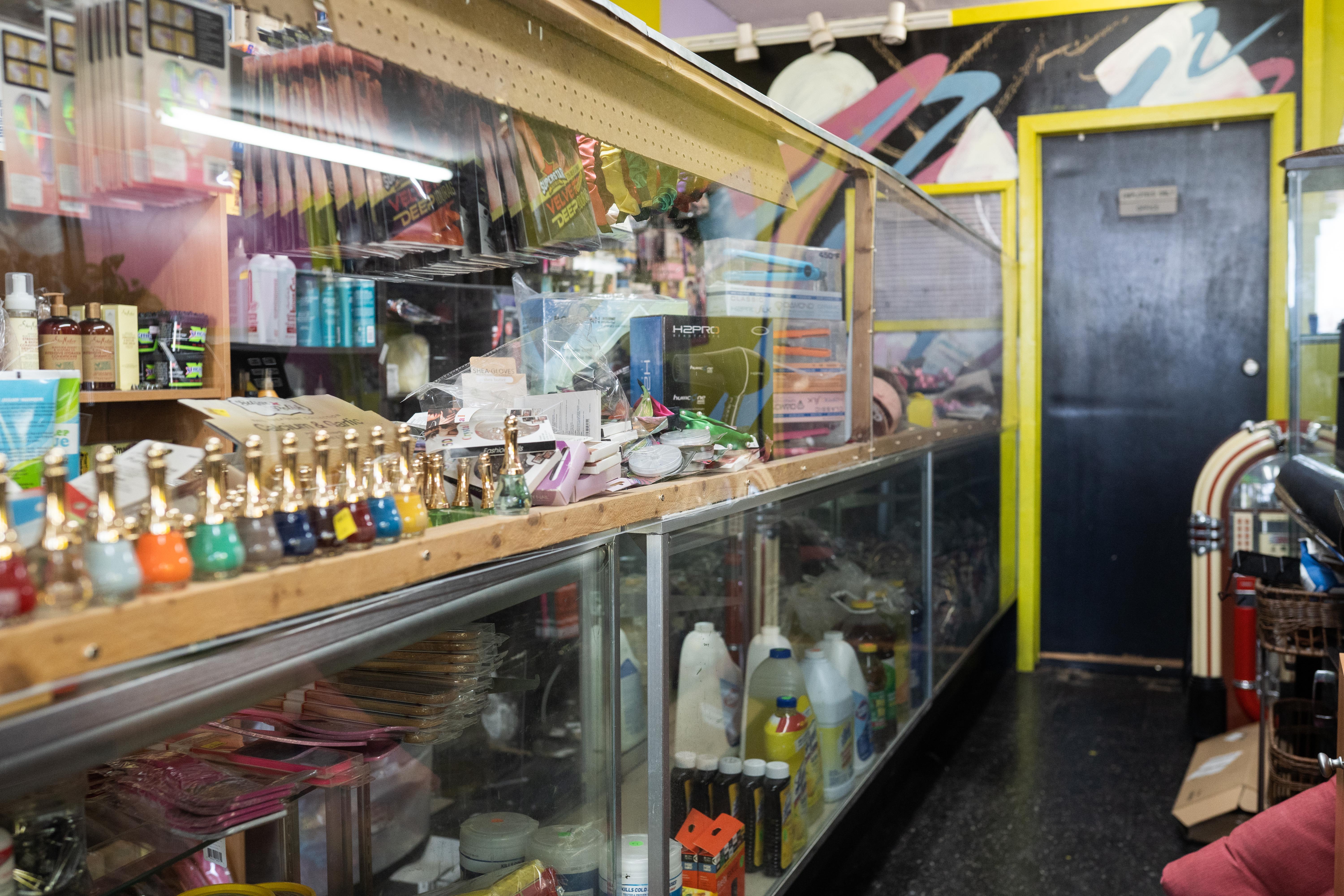 “I just felt like it was some activity that people took at that time to just take advantage of a bad situation,” Porter said. “I just wish they would’ve thought about what they were doing before they set out in whichever way they decided.”

Porter was forced to close her West Englewood salon. The damage occurred at an especially difficult time for the business. The coronavirus pandemic already had forced her to close the salon several times. The additional financial strain of repairing the damage from the looting had her contemplating cutting her losses and retiring three years earlier than she’d planned.

As her troubles compounded, she suffered a bad bout with depression that kept her from leaving her bed.

But her family encouraged her to get through it and reopen the salon. And just as she had felt betrayed by some in the community, others there gave her a lifeline.

People in the neighborhood started calling, asking how they could help, offering words of encouragement. Some stopped by the salon to urge her to keep going.

She was ultimately closed for a month as she worked through cleaning the debris, repairing the damages and resupplying her inventory. The damage and lost goods, in the end, cost Porter over $30,000 — none of which was covered by insurance.

Even when she was able to reopen, she was nowhere near ready. She recalls being left only with a half-empty container of hair relaxer, and having to ration that meager amount between appointments, then taking what she made on those appointments to finally buy more.

Still, a year after her business was nearly destroyed, she understands the frustration and anger people were feeling those several days at the end of May 2020.

“It’s bad that it happened but ... it is about time,” Porter said. “I hate that my business was caught up in it, but to be honest, it is about time that people speak up and let people know that not all police are bad, but there are so many police out here that have been doing violent things to people just because they walk around with a badge.”

Porter said she felt her small business was sacrificed so that police could devote their time to protecting businesses downtown.

“You did not protect the entire communities. You protected what was important to their pockets,” Porter said of the city. “Yes, downtown got some damage, but not like the inner city, not like our neighborhoods. We have no grocery stores, the Walgreens was tore up, Walmart was tore up, the small businesses were destroyed, and the police rolled past as if it was nothing. They did not stop, they didn’t blow a horn, they didn’t get out, they didn’t say anything.”

A few hours before Porter sat crying on the curb, Qiana Allen was lying in bed when the alarm system for her boutique, Culture’s Closet in Beverly went off. She pulled up her store’s security cameras on her phone to see what was going on.

“I saw guys and a girl literally running through the window grabbing stuff,” Allen said. “Grabbing our computers, clothes; they broke our register, they were just kind of tearing up everything in the store.”

She jumped out of bed and raced to the store, hoping to stop the looters from taking everything, but when she arrived, all the damage had been done. Her windows were shattered, the store ransacked. One of her mannequins even had been used to break into a store across the street.

“For that night in general, it was kind of like ‘The Purge,’” Allen said. “Because even when we pulled up, there were people driving down the street, hanging out of their cars, screaming, throwing stuff — just going crazy.”

She said police in her neighborhood were doing everything possible to help business owners and chase down looters. The only problem was, those officers were overwhelmed and outnumbered.

Allen also believes the city’s move to raise several bridges along the river may have been a mistake.

“I do kind of feel like with them closing that bridge off, it pushed all those looters south, and I don’t know if that was purposefully done,” Allen said. “I had no clue they would come anywhere near 95th Street because there weren’t any protests over here.”

That night cost Allen $37,000 and forced her to close the store for two weeks while she replenished her inventory. But she was fortunate that her insurance company covered most of the cost.

“What hurt me the most is I saw the people who came in were young Black boys kind of like my son’s age, and the crazy part is they don’t even know what the protests were really about,” Allen said. “They just took an opportunity that they saw fit to kind of basically steal and not even know this was a Black-owned business as well.”

Georgia Utendahl, owner of Georgia’s Food Depot, was at her Englewood soul food restaurant during the looting.

For seven hours that Sunday, May 31, she and a few of her employees stood by their front door, behind the iron fencing that stretched across their storefront. They watched people jumping out of their cars and charging into neighboring businesses, leaving with whatever they wanted.

“It was really bad. Devastating. I found myself crying for other business owners,” Utendahl said.

She wasn’t scared to see the pandemonium happening just inches away from her, but it was sad seeing people walk away with “millions of dollars worth of merchandise” from a nearby liquor store, restaurant and cell phone store.

But after hours and hours of protecting her restaurant, she needed to go home and rest. She and her staff left about 9 p.m.

Soon after, looters broke in, somehow breaking through the security fence. Their goal appeared to be to remove the ATM sitting at the end of her dining area — though they were unsuccessful.

Still the damage was significant, forcing her to shut down for nearly a year. She reopened only seven weeks ago.

Asif Raza made a run for it when he heard glass shattering at neighboring businesses, and then at his own eatery, Star Sub, at 7900 S. Exchange, that day in May. His alarm started going off. He immediately called police, but those calls went unanswered.

The next morning, he returned to see complete destruction. Looters had walked away with all his food, his TV, an ATM and anything else worth taking.

It took him at least two months to get his sub shop back to normal, and even then, he added, it was only because of the support he received from the South Chicago neighborhood. They helped him pick up the debris, installed windows, and more importantly, ordered food.

“The community here is very nice, and they always support us,” Raza said. “Most people know we have been here for a long time, and we try to help out any way we can.” 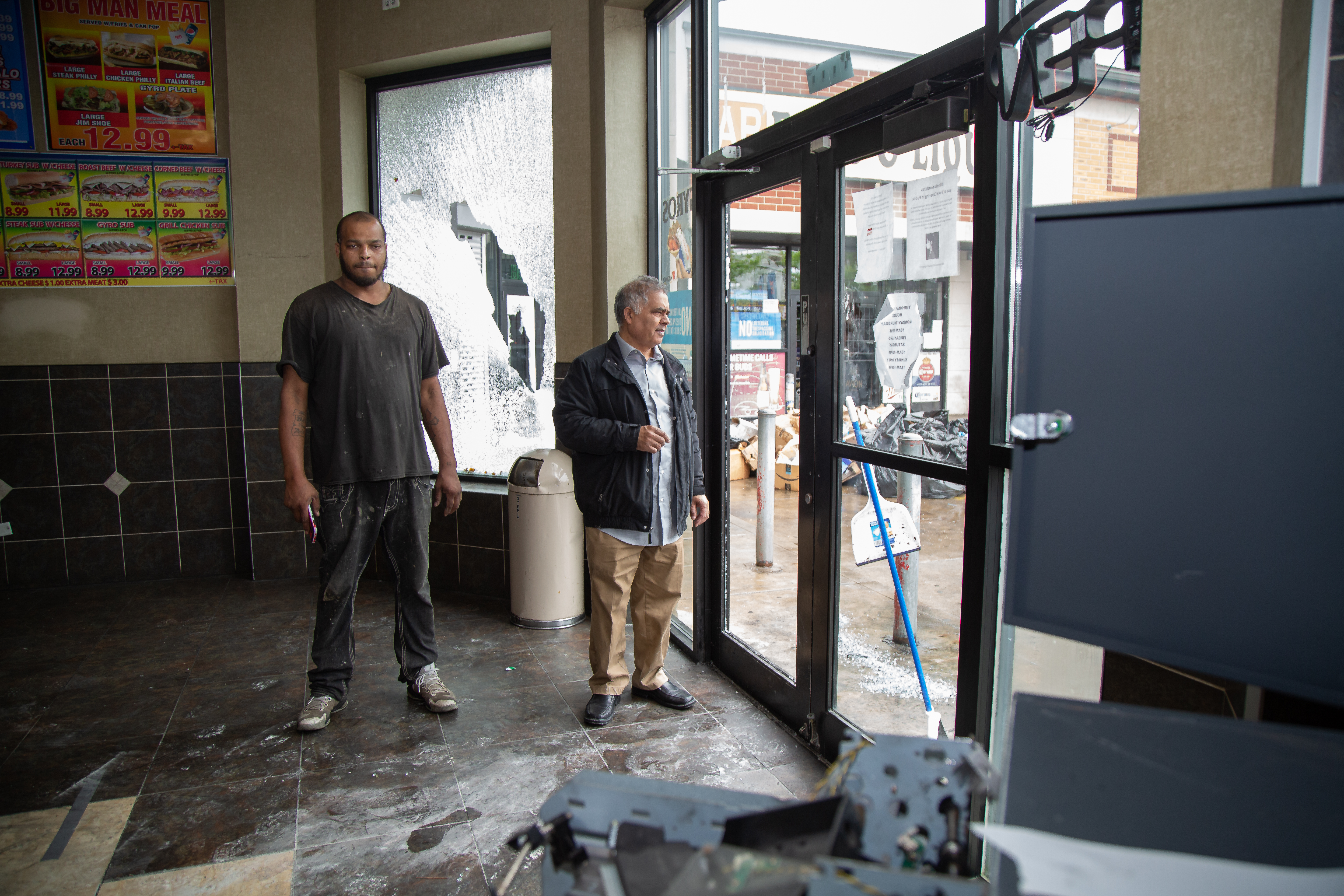 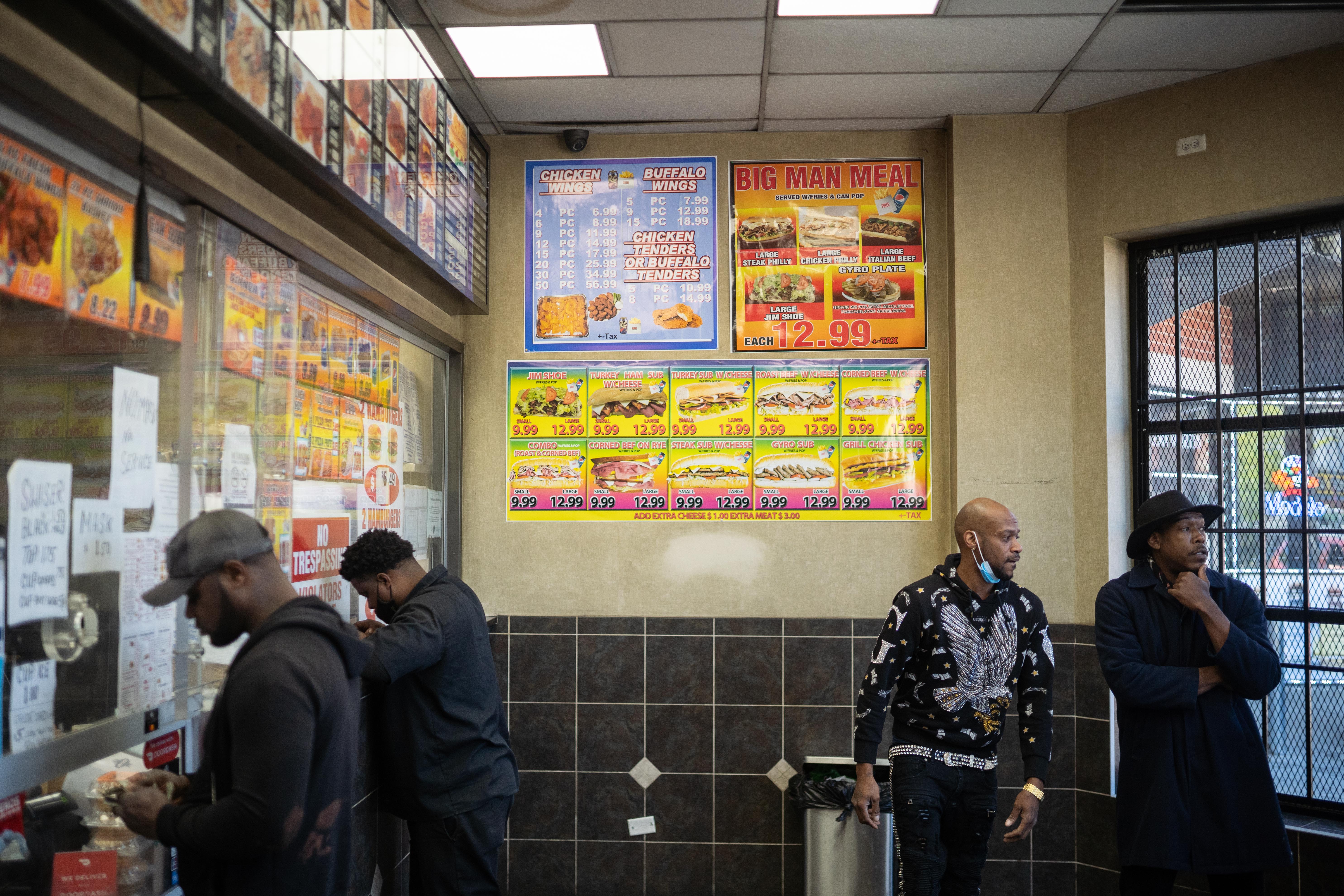 One year later: Chicago in wake of George Floyd killing and protests

A tough but necessary call on busing for CPS students