Cook County Assessor Fritz Kaegi admits his office made numerous errors managing a program that shifted $250 million last year in taxes from eligible seniors onto everyone else.

The 3,300-square-foot condo in Water Tower Place isn’t on the ocean, like owners Barbara Kaplan Israel and Martin Israel’s place in Florida, but it does have jaw-dropping views of Lake Michigan.

They’ve had the place for decades. Their property tax bill last year for their condo on the Magnificent Mile? Just $2,502.

The Israels — who pay $19,000 a year in property taxes on their oceanfront condo in Boca Raton, Florida — pay so little in Cook County property taxes thanks to a law the Illinois Legislature passed three decades ago establishing what’s called the “senior citizens assessment freeze homestead exemption” and problems with how the Cook County assessor’s office manages the program.

Legislators portrayed the senior freezes as a way to protect homeowners over 65 years old, many on fixed incomes, from being hit with big tax increases if, thanks to gentrification and booming development, home values and property taxes in their neighborhoods shot up, creating financial hardships for older residents.

In Cook County, though, officials admit the program is riddled with errors. And oversight is so lax that they don’t even try to verify that applicants meet the household income threshold of no more than $65,000 a year.

That’s according to a Chicago Sun-Times investigation that found:

The Sun-Times analysis “doesn’t do anything to build the confidence of the public” in the property tax system, says Laurence Msall, president of the Civic Federation, a government watchdog organization in Chicago that wants to eliminate all property tax exemptions, including the homeowner exemption and the senior assessment freeze.

“For someone to get a tax break, it has to be pushed onto someone else,” Msall says. “There’s a need for overall reform of the property tax system in Cook County and the layering of exemptions with different levels of eligibility that are difficult to verify.”

More from The Watchdogs

The legislators who created the freeze in the 1990s were vague about how it should be handled. That’s in contrast to other states with similar programs, which require seniors to submit income tax returns and can perform audits.

“The Cook County assessor doesn’t have the legal authority to determine or challenge someone’s household income,” Msall says, nor even to verify that someone getting the senior freeze actually lives in the residence getting the tax break. “There’s no way to determine who lives there.”

While Kaegi’s office does nothing to verify the income of each senior with a freeze, DuPage County Supervisor of Assessments Helen Krengel says her office requires seniors to submit their federal income tax returns the first time they apply for an assessment freeze. DuPage County has 15,044 properties that get the senior freeze — a little more than 10% of the number getting one in Cook County.

He says he knew the previously undisclosed problem with senior freezes existed when he took office in December 2018.

“There are some people who don’t qualify for it,” Kaegi says. “The question is: How do we find them?”

He has 10 employees who look for people who are getting property tax exemptions they aren’t entitled to receive. But his staff focuses on taxpayers collecting homeowner exemptions on more than one property, which is illegal.

It doesn’t examine the senior assessment freeze properties to determine whether the seniors qualify because Kaegi’s office says it doesn’t have the staffing it would need to look at tax returns and other financial records of those seniors.

Kaegi’s staff did 25,720 investigations last year, catching 3,054 taxpayers who were illegally collecting exemptions, securing $4.8 million in refunds for Cook County school districts, municipalities and other government agencies, according to a spokesman, Scott Smith.

He says some seniors have gotten unwarranted tax breaks because their assessments were miscalculated by the mainframe computer.”

“We are moving off the mainframe and onto a new integrated property tax system [that] will ensure a more accurate, transparent and fair assessment system,” Smith says. “We are speaking with legislators about proposed language that would close loopholes and strengthen audit capabilities. Options include limiting senior freeze exemptions to those whose homes are under a certain market value or requiring submission of tax forms for a certain number of years.”

As a result of the Sun-Times’ findings regarding mistakes in calculating tax bills for seniors whose assessments have been frozen, Smith says, “We’ve begun a sampling audit to determine the extent of the problem and explore potential solutions.”

Says Kaegi: “We don’t want to be sending out assessments that are mistaken.” 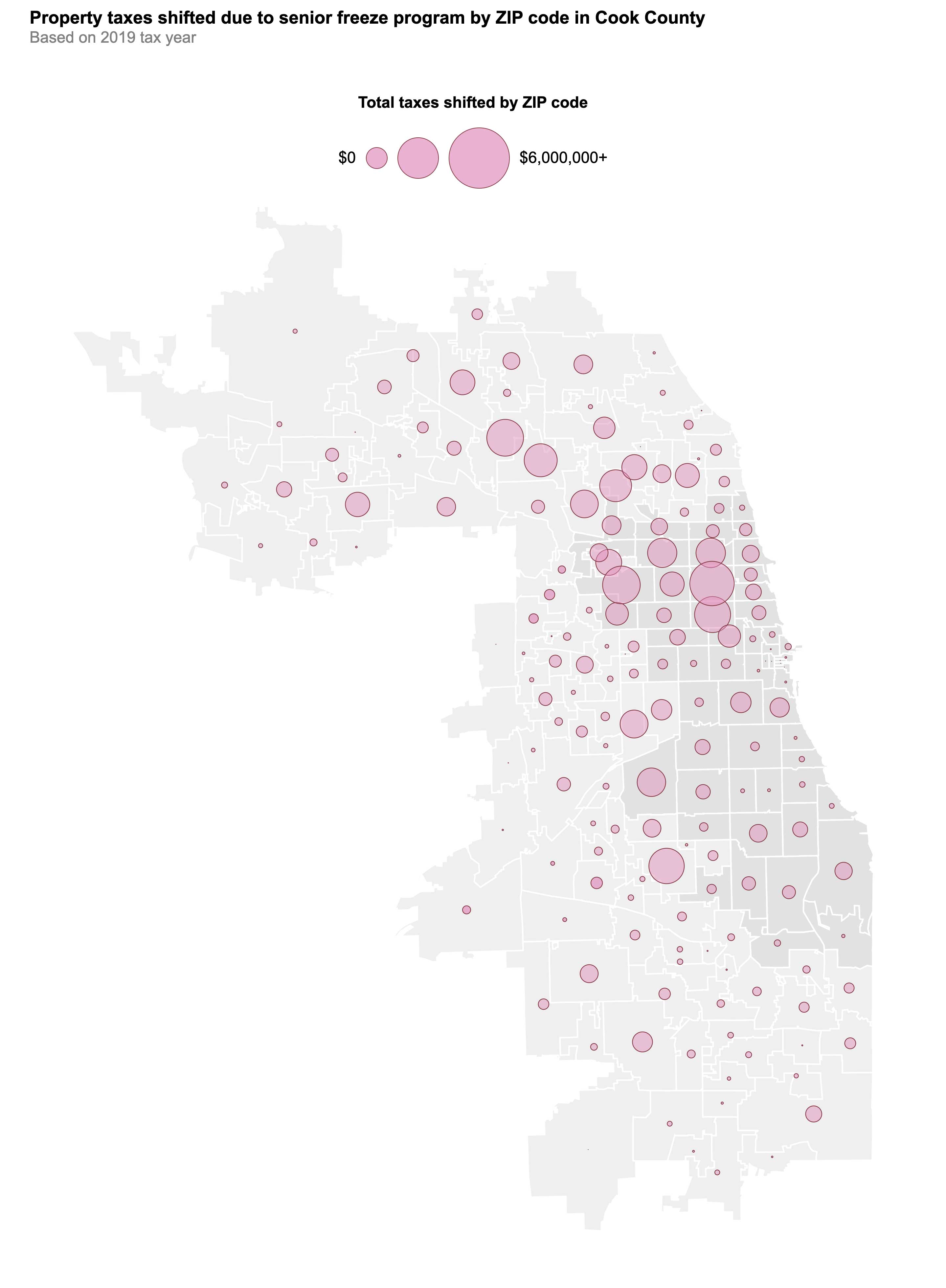 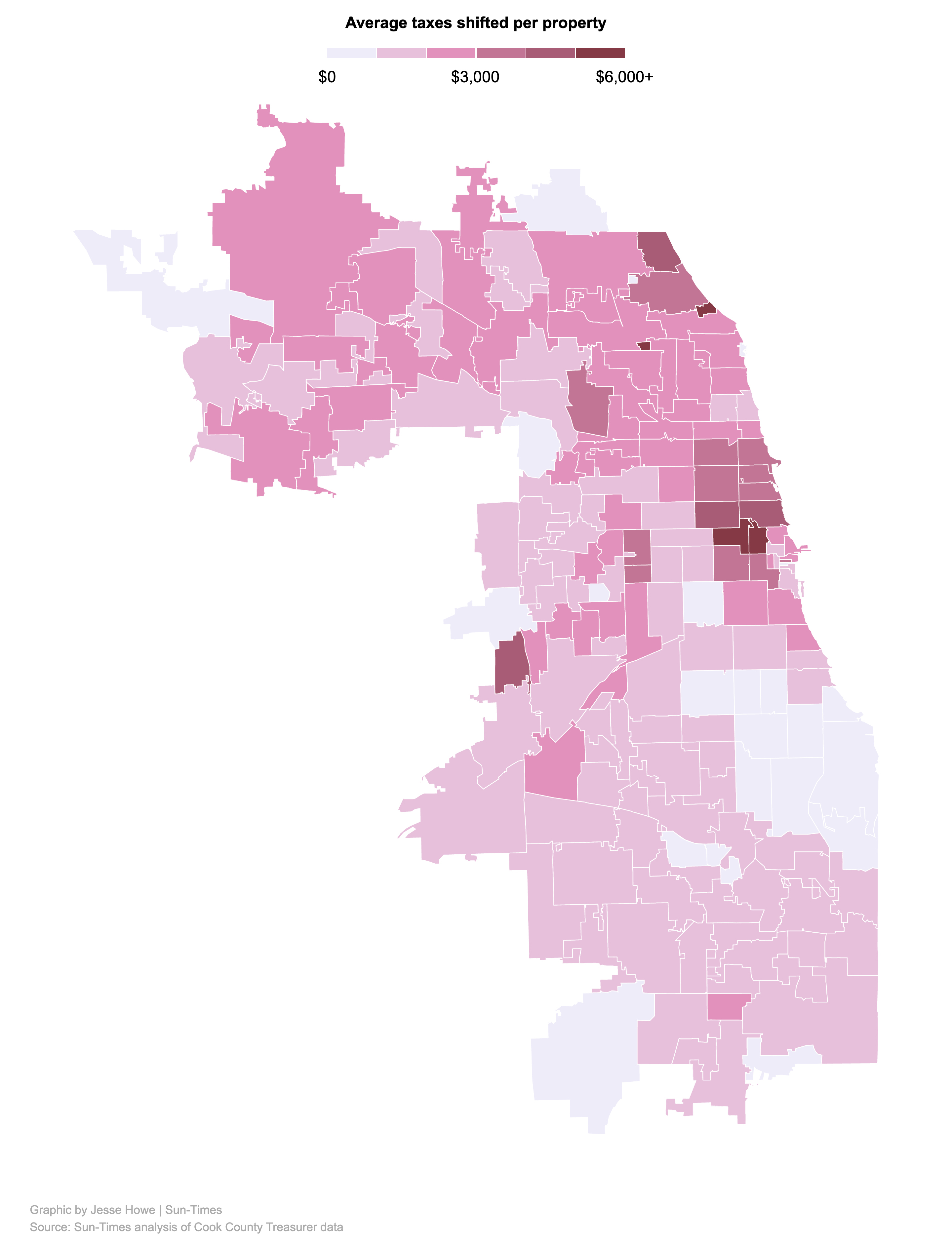 Though the senior freeze was designed to limit the impact of gentrification in newly booming areas, it’s also very popular in historically wealthy areas including Glencoe, Winnetka and the Gold Coast — where the Israels were among the lucky beneficiaries of the assessor’s computer glitches.

That shaved $18,525 off the tax bill that Barbara Kaplan Israel, a retired stockbroker, and her husband, who was a commodities trader, paid last year, records show.

She once paid $10,000 for a pair of earrings at an estate sale for the late Jacqueline Kennedy Onassis and, in a case that was settled out of court, sued Chanel for $160,000 over clothing she was having the couture house make for her.

The couple’s senior freeze dates to 2011, according to county records, when Kaegi’s predecessor Joseph Berrios locked in the value of their 58th-floor condo at $399,414, meaning they would pay property taxes on no more than that figure, no matter how much their unit increased in value, records show. According to the assessor’s office, the frozen level could decrease if the property’s assessment value fell, as it did in 2014 — to $323,182.

Their yearly property tax bills hovered a little above $20,000 until 2017, when their bill plummeted to $12,229 as they were remodeling the unit. The Israels successfully argued to Berrios for a tax break, arguing that the condo was uninhabitable during renovations because their toilets had been removed. That got them a tax refund of $18,809.

According to Smith, that “certificate of error” triggered the assessor’s mainframe computer to reset their freeze assessment, lowering it to $54,314.

The incorrect Cook County assessment remained in the computer until the Sun-Times began asking the assessor about the Israels’ condo.

Over the past five years, the Israels would have been billed $142,125 in Cook County property taxes. The freeze should have lowered their tab to $107,514. But they actually paid only $51,935 over that period because they got the $18,809 refund while the condo was renovated, and the computer glitch shaved off another $36,770.

Smith says the assessor’s staff might now audit the Israels. But if the error is determined to be the assessor’s fault, Smith says his office won’t try to get back any money from the couple.

The Israels aren’t the only beneficiaries of errors by the assessor’s office involving the senior freeze. Prompted by questions from the Sun-Times, the agency confirms errors involving properties including these:

There’s now legislation pending in the Illinois General Assembly to expand the senior freeze program by increasing the household income cap to $75,000, a proposal that would raise property taxes on everyone else who doesn’t qualify for the program.

At the time, amid an election year, with seniors a key voting bloc, then-Gov. Jim Edgar vetoed the bill, worried about shifting the burden onto remaining homeowners.

Lawmakers overturned his veto, instituting the benefit for homeowners 65 and older below an income threshold that has risen over time to $65,000 a year.

“I had to be the fiscal disciplinarian,” Edgar says now of his veto. “Anytime you have changes to the tax code, you don’t know how it’s going to turn out, and people are going to game the system.”

Some Illinois seniors can have up to $5,000 a year in property taxes deferred

Some seniors can get up to $5,000 a year in property taxes deferred

Seniors in Illinois also have another way to get a break on their property taxes.

People 65 or older whose household income is no more than $55,000 can enroll through their county treasurer.

For those who qualify, the state of Illinois will pay up to $5,000 a year towards their property taxes.

Eventually, though, that has to be repaid with interest. The state places a lien on the property to recover the money it paid — plus 6% interest — whenever the property eventually is sold.

It isn’t anywhere near as popular as the senior freeze program. This past year, the state spent nearly $750,000 to help pay property taxes on 257 homes in Cook County, according to the county treasurer’s office.

Next Up In The Watchdogs
Putin’s pollock: U.S. seafood imports fuel Russian war machine
Chicago police supervisors obstructed probe of sergeant’s suicide, resigned before they could be fired, inspector general says
Tom Dart, judge at odds over required 2-day furlough from home confinement for suspects on bail
ATF cited stores that most often sold guns used in Chicago crimes, then let them off easy
Outlaws Motorcycle Club ‘enforcer’ denied compassionate release, ‘showed no compassion’ in killing McHenry County couple
Taxing times for popular South Side restaurant eased by county agency
Most Read
Husband of ‘Real Housewives of Beverly Hills’ star Erika Jayne indicted in Chicago
Woman charged with concealing death of mother, whose body was found in freezer at their Portage Park home
Dear Abby: Teen walks around house, answers door in her underwear
Thieves make off with 100 boxes of Thin Mints as Girl Scouts, parents unload truck on Northwest Side
Jason Benetti on White Sox contract talks: ‘It was kind of a pain’