Austin, West Englewood lost the most Black residents in 10 years, the census shows. Why did they leave and where did they go?

Chicago has been losing Black residents for decades — some with hopes of finding better economic opportunities, and others seeking easier access to basic resources like grocery stores.

Share All sharing options for: Austin, West Englewood lost the most Black residents in 10 years, the census shows. Why did they leave and where did they go?

Yolanda Anderson had owned a property gem in Austin for decades before she had no other choice but to put it up for sale.

She didn’t want to do it, but when she was unsuccessful in securing funding to do extensive renovations on the pink-and-white Victorian — a marvel among passersby — she had no other choice. When the house sold in March, she moved her family to Oak Park, where they rent a condominium.

“We really put our all into it,” Anderson said. “We reached out to the mayor, to our alderman, and there’s just no help for situations such as ours.”

Many Black Chicagoans have made the decision to move out of the city after finding it difficult to justify living in neighborhoods that have been stripped of amenities and resources for its residents. The city lost 85,000 Black residents between 2010 and 2020, according to census data.

Chicago has been losing Black residents for decades. In the 1970s, there were more than 1 million Black residents in Chicago. But census figures show that by 1990, the number of Black residents was decreasing, according to an analysis from demographer Rob Paral.

Today about 787,000 Black residents live in Chicago, according to the census.

The departure of Black residents is most evident in Anderson’s longtime home of Austin and further south in West Englewood, which accounted for more than a quarter of Black Chicagoans that left Chicago during that time.

Former and current residents of these two communities spoke with the Chicago Sun-Times about why they left the city — some with hopes of finding better economic opportunities, and others seeking easier access to basic amenities like grocery stores and quality housing.

All of them said decades of disinvestment in the city drove them away from the communities they had called home for decades.

A ‘purging’ of resources in Austin

Anderson couldn’t find an apartment that met the family’s needs in Austin, so they settled in nearby Oak Park, where her mother’s doctors were located.

She wishes Chicago had more programs for struggling homeowners. Anderson misses the sense of community in Austin, from neighbors who looked out for her father in his last days to family mobilizing to do handiwork around the home.

“It’s a bunch of people who have a lot to contribute that have just as much care and concern for where they live and are trying to work hard and do the best they can for their property,” Anderson said about her old neighbors. “But just the general support of the city sometimes doesn’t make it as far out as the West Side or the South Side of the city, and it gives an impression like nobody cares.”

In the past 10 years, Austin’s overall population decreased by nearly 2%, from 98,514 residents in 2010 to 96,557 residents in 2020. It was once the city’s most populous community area; it’s now the third-largest community area in Chicago — behind the Near North Side and Lake View — as more people have moved closer to downtown.

Austin also lost white and Asian residents in the past decade, but the population of Latino residents did grow by about 10%. Latinos now make up about 19% of the West Side neighborhood — with more than 18,500 residents.

What can be done to stop Chicago’s Black exodus?

Longtime Austin resident Crystal Gardner wonders whether people are leaving on their own or if they are being forced to leave, pointing out decades of disinvestment.

“It has, in my opinion, been a consistent, concerted effort in the decline or the purging of public health, public safety and public education,” said Gardner, who still calls Austin home. “That effort comes in the form of a lack of vision from our leaders. That lack of vision to see the Black flight, to see the data, to see the decline in numbers and services and organizations providing service, and then to not have a plan or a strategy to address that.”

After George Floyd’s killing in Minnesota in 2020, Gardner, 38, started a Facebook group called “Activate Austin” as a hub to share community resources such as food drives, community events and fitness programs. She’s also part of a push to rename Austin’s Columbus Park.

In 2013, Ke’Oisha White had just received her master’s degree from Keller Graduate School of Management in Chicago, but she was struggling to land a job in the tech field. She grew up in a two-flat home in Austin with her extended family and was a first-generation college student.

She applied to as many jobs as she could before receiving an offer in Houston, Texas, that would pay relocation costs. She accepted and doesn’t regret that decision.

“I’m not moving back,” White said. “Visits only. I love Houston. I definitely love it — the cost of living, I love the opportunities here, the different field opportunities, I love the culture.”

White, 33, still considers Chicago home, and she misses the annual Bud Billiken Parade and the Taste of Chicago. Most of her family still lives in Chicago.

“There are no stores; everything is boarded up,” White said about the community. “It’s just sad. It’s a waste of opportunities, it’s a waste for the people, and I wish that more can be poured into that neighborhood.” 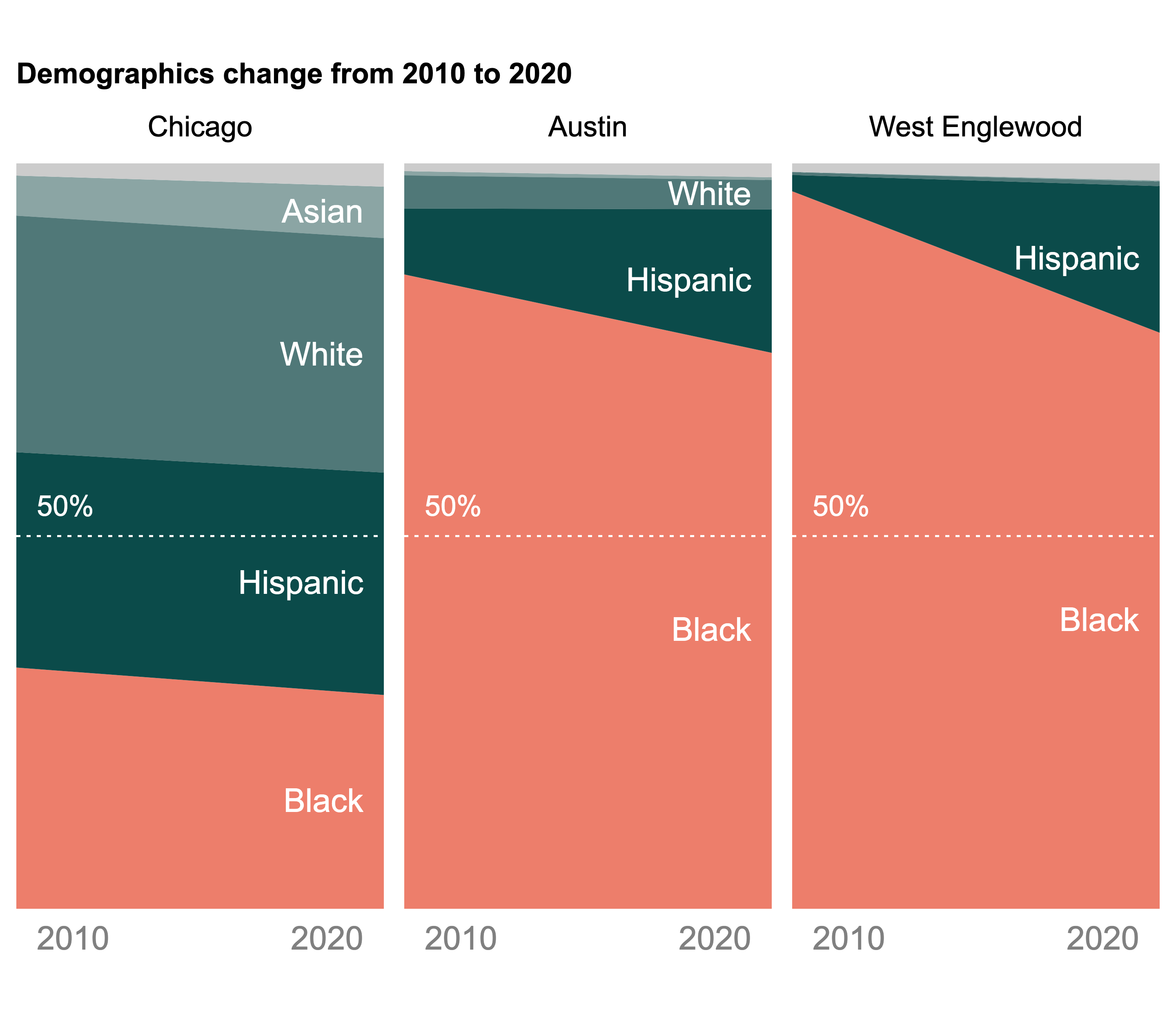 For nearly 20 years Darlene Morris has helped families sell and buy homes throughout the Chicago area, with much of her experience based in West Englewood. It’s a community she grew up in until she moved to a nearby suburb.

She has since moved back to the city and is now living in South Shore — one of the few communities that saw an increase in Black residents. South Shore’s Black population grew by nearly 500 people between 2010 and 2020, census data showed.

But the decrease in the Black population in West Englewood is the most dramatic of any Black-majority community area. In 2010, the neighborhood was 96% Black, but by 2020 it dropped to 77% Black.

Morris said families are leaving West Englewood because there are few resources and what she calls a poor walkability score — a metric used to determine amenities within walking distance of a home.

“If you live in Lincoln Park, you can walk to a deli, a bakery. You can walk to a real grocery store; the neighborhood schools are great, and I am within a walkable distance of the things I need and it serves me well,” Morris said. “When I was growing up there was a doctor’s office, a jewelry store and a grocery store — well there is one in Englewood now, but after how long?”

Morris said she is helping West Englewood residents find homes in Country Club Hills, Hazel Crest and South Holland. With 3,000-square-foot homes going for around $300,000 that were only built within the last 20 years, it is enticing for both the young and old, she said.

“People will read about Black folks leaving West Englewood and would want to almost instinctually point to crime as a reason for people leaving,” Morris said. “I am telling you crime or violence is not the driving factor. This is Chicago, we’ve been tagged a crime city for generations and that never stopped growth.”

Morris points to a surge in Latino residents moving into West Englewood over the past 10 years.

The Latino population ballooned from just 774 residents in 2010 to 5,832 in 2020, which now makes about a fifth of the community’s population.

“It’s not to say that some people aren’t moving away because of crime, but I believe it’s not the main point,” Morris said. “If crime was as big of a deterrent as everyone is saying, why are Latinos moving in?”

Crime was, in fact, John Daniels’ motivation for moving out of West Englewood, but he stresses that it is only a byproduct of disinvestment in the community.

“West Englewood when I was growing up was poverty-stricken, and there weren’t any boys or girls club or anything for us,” Daniels said. “I started losing friends to death or to the criminal justice system, and it felt like a cycle. I just remember thinking I need to get out of this neighborhood.”

Daniels remembered visiting his aunt’s home in Hazel Crest and noticed there were no vacant lots, it was quiet, everyone’s yard was tidy and there was a sense of peace. He wanted that for his family.

So he saved until he was able to buy his first home in Matteson last year — a move he doesn’t regret.

But West Englewood is still home to Daniels.

He visits his parents every weekend in his childhood home, which they’ve owned for 55 years. Daniels isn’t sure if he will ever return to live, but that doesn’t mean he has abandoned the community either.

“I would like to buy some property there, like one of those vacant lots, and try to do some good with it,” Daniels said. “Maybe build a home or even open a nice store.”

Jesse Howe and Andy Boyle contributed to the data analysis for this report.

Elvia Malagón’s reporting on social justice and income inequality is made possible by a grant from The Chicago Community Trust.

About 1 a.m., the shooter opened fire on a car driving east in the 2600 block of West 24th Street, grazing a 22-year-old woman in the head, police said. The person then shot at another car, wounding two 19-year-olds, authorities said.

A man, 35, was walking to his car about 12:30 a.m. in the 700 block of North Wood Street when someone exited a white sedan and demanded the man’s backpack, before shooting him in the arm, police said.

An energetic offense and a 37-save shutout by Marc-Andre Fleury powered the Hawks to a 3-0 win on a lively night at the United Center.

Allen set a team playoff record with five touchdown passes and Devin Singletary ran for two scores in a 47-17 throttling of the Patriots.